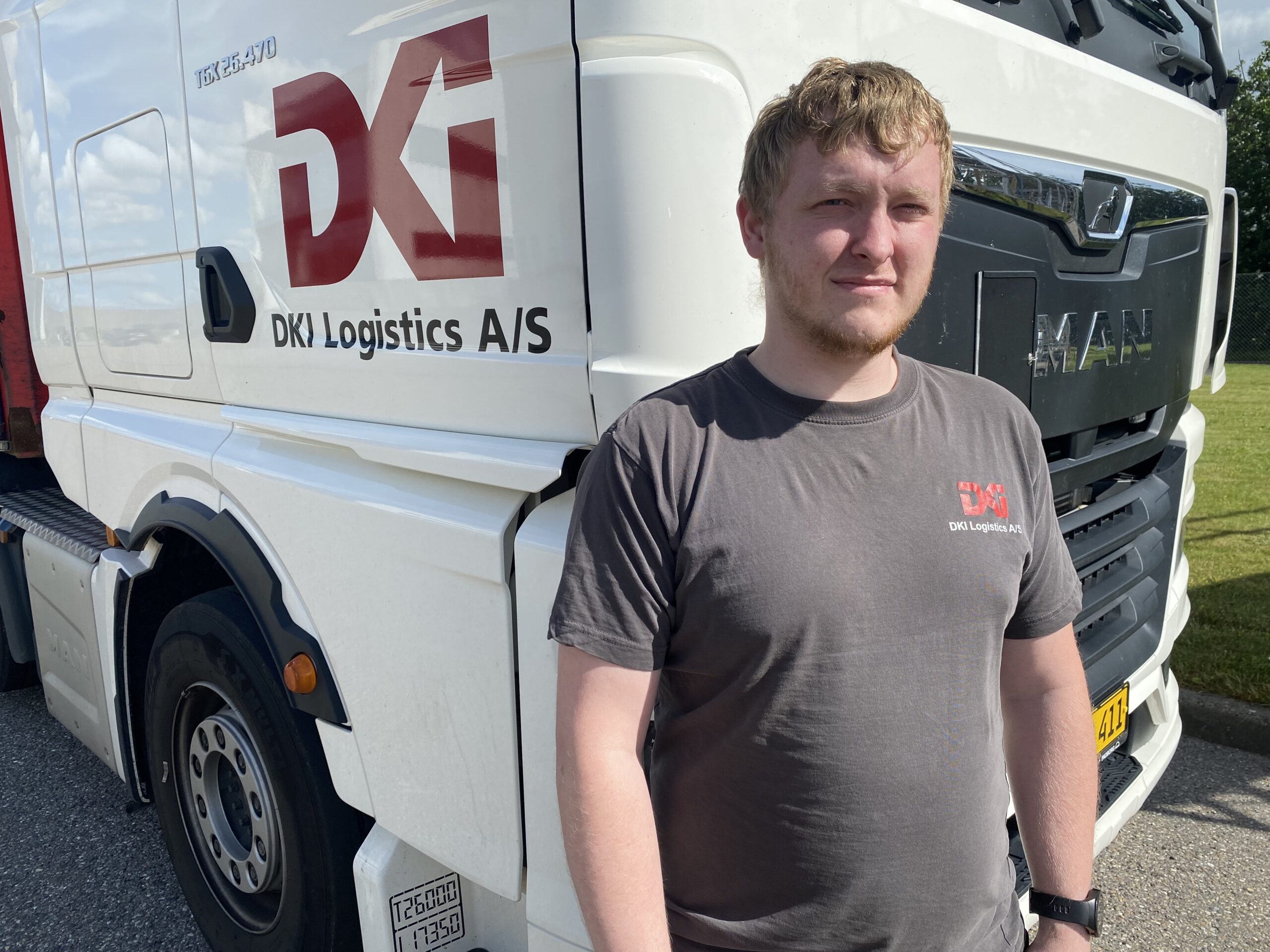 “I’m more than just a number here. I’m a member of the team.”

Quoting 26-year-old Alexander Froulund Pedersen who is an apprentice road freight driver at DKI Logistics A/S. The papers were signed a while ago, but it is only recently that Alexander has shown his face at the company on a daily basis.

His apprenticeship started with initial vocational training (IVT) at Learnmark College in Horsens. Some of the modules in IVT are taught to both apprentice road freight drivers and apprentice warehouse operators. The whole class visited the DKI Logistics warehouse.

“I chatted to the guy who showed us round and asked if it were possible to get an apprenticeship here. He advised me to send in an application,” Alexander explains.

Alexander’s application made such a good impression that DKI agreed to take him on.

“Alexander is an energetic young man. We welcomed his application,” says DKI’s Transportation Manager, Søren Knudsen. “And DKI is more than willing to train people to work in our industry,” he points out.

Many tests to pass

Before Alexander could step into his new workplace on Egeskovvej in Horsens, he had to pass a long IVT period and a series of tests.

Unlike other training courses, most of the exams that are part of a transport apprenticeship lie at the beginning of the training period rather than towards the end.

“If you are interested in this type of apprenticeship, you have to be prepared for a lot of tests,” says Alexander, who would not normally describe himself as someone who loves schoolwork.

Originally, he wanted to become a mechanic but could not find anywhere that would allow him to roll his sleeves up and work. He thinks it is important for him to be active.

“Before I applied to work here, I asked around and I heard nothing but positive things about DKI. People said there was a stronger sense of community here than elsewhere.”

Alexander finds that this is true:

“For example, we hold a ten-minute meeting in the morning before we drive off. And there is always someone I can ask if I am in doubt about something.”

DKI Logistics owns a fleet of 10 trucks that run in a two-shift system from locations at Horsens and Køge. DKI employs 20 drivers. In addition to the Transportation Manager, there are five administrative staff: a senior dispatcher, two dispatchers, an apprentice dispatcher and an office clerk.

“Mostly we drive for DKI’s own warehouse customers all over the country, but sometimes we work for large companies in the local area,” says Søren Knudsen.

Would you be interested in becoming an apprentice road freight driver? Please contact Transportation Manager Søren Knudsen by e-mail sku@dki-logistics.dk

It takes three years to become a road freight driver.

If you live on Zealand, you can choose from several colleges, including ZBC – read more here (in Danish) https://www.zbc.dk/ungdomsuddannelse/erhvervsuddannelse/teknologi-byggeri-og-transport/vejgodstransportuddannelsen

DO YOU HAVE QUESTIONS? PLEASE DO NOT HESITATE TO CONTACT US

Have you read our case stories?

Learn more about our customers and solutions here.